For cities looking to invest in smart technology, intelligent street lighting offers the chance to reap outsized benefits for a relatively small investment. In its simplest form, networked LED lighting promises to lower energy costs by using motion detectors to provide illumination only when needed. Beyond energy efficiency and advanced lighting capabilities, city planners looking to harness data-driven intelligence can use networks of smart street lights as the foundation on which to build powerful smart city applications.

While there are a variety of smart city initiatives that can benefit both officials and citizens, adaptive lighting offers city planners the most bang for their buck. First and foremost, it can be implemented piecemeal and without a massive overhaul of existing infrastructure — by simply replacing street lights that already need to be upgraded.

Smart street lights can be outfitted with a vast array of sensors and cameras to collect critical data, help cities make well-informed decisions, and improve city useability for residents. On top of the Internet of Things (IoT), street lights can communicate with each other wirelessly while monitoring traffic conditions, tracking maintenance updates, alerting officials to potential security risks, and more.

Easily scaled, and extremely flexible, intelligent lighting systems will very likely be at the forefront of urban development as cities begin to take a leap into the future.

Navigant Research estimates that by 2023, there will be 100 million LED street lights in use, one for each HPS fixture. These smart lights will help cities reduce electricity costs, lower CO2 emissions, and improve maintenance. With auto-dimming, scheduling, and a host of other capabilities, cities could see a 50-75% reduction in energy costs via smart street lighting. 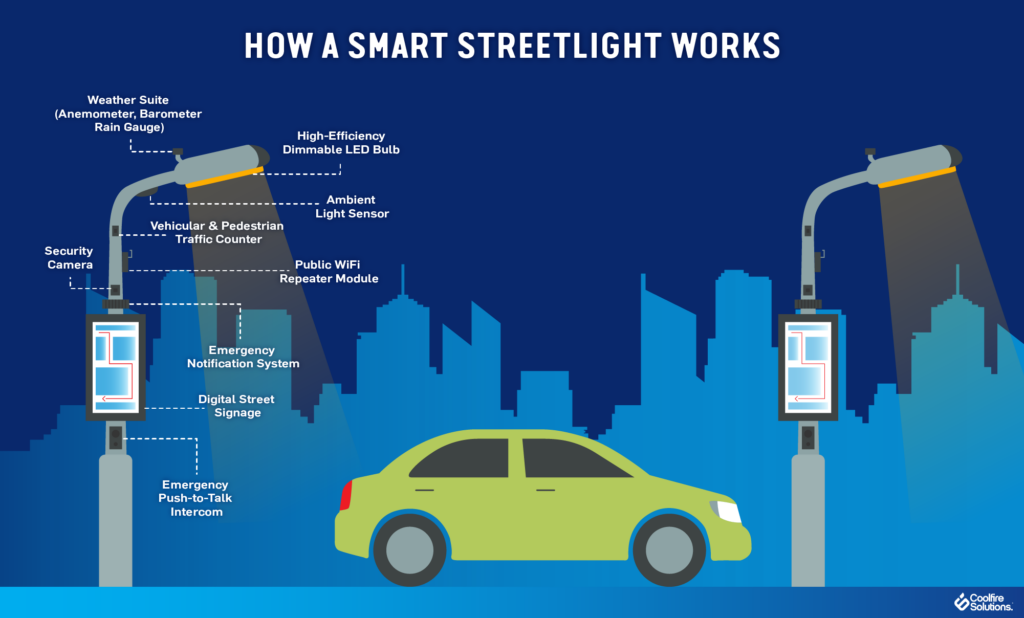 Smart street lights are cropping up in cities across the globe, with promising results in terms of safety and energy conservation. Chicago leads the way with a $160 million project to replace 85% of the city’s public lights — an initiative that the mayor’s office projects will lower energy consumption by 50-75%.

Los Angeles has installed smart street lights on 80% of its roadways. These connected lights feature LED bulbs and 4G LTE wireless connectivity, as well as sensors capable of detecting gunshots and other threats to public safety. In the first year alone, LA has benefitted from a 63% reduction in energy costs in addition to improved city-wide cell service.

In Dallas, TX, the Smart Cities Living Lab program is developing several projects in the West End Historic District. The city has partnered with AT&T to install 23 smart street lights with LED bulbs, as well as additional devices that can manage parking, irrigate lawns, and monitor air quality. Since beginning this initiative, the West End has seen a 35% reduction in energy costs, 12% increase in local business revenue, and 6% decrease in crime. If the program were to be implemented across Dallas’ 85,000 lights, the city would expect approximately $90 million in yearly savings.

As Schenectady, NY deploys smart street lighting throughout the city, Mayor Gary McCarthy is examining further ways to benefit from IoT technology. The city’s LED lights use motion sensors to dim when there is no traffic present, and the entire network is accessible through a secure web browser. Schenectady light posts will be equipped with HD cameras to improve the flow of traffic and protect citizen safety. McCarthy also believes that these cameras could enhance city maintenance efforts by, for example, taking one photo of the street surface per month over a three to five year period.